The inaugural Giant Challenge has come to a close, and we are thrilled with the participation and the funds raised.

Hundreds of people participated as players or fans, and we raised more than $17,000 for the Giant Dreams Endowment.

To all the alumni, athletes, and fans who came out for this first annual Giant Challenge, we say THANK YOU! To our alumni team captains, and to all the coaches, volunteers, and staffers: we could NOT have done it without you! Thank you just isn’t enough, but we’ll say it anyway: THANK YOU!

From the Giant Golf Scramble on Friday morning (with pro golfers and Giant alumni Jeff Gallagher and Jackie Gallagher-Smith playing along with hundreds of others from the community and beyond), to the Giant basketball game on Saturday night (with pro players Scott Wood, Julius Mays, and many more all-stars on the court), and all the amazing events in between, it was just fantastic to see the Giants of yesterday and today face off and have fun!

It was such a wonderful weekend, and we hope you all created some great memories. And we hope you are proud of the role you played in the first big push to get the $2 million Giant Dreams Athletic Fund filled, to provide opportunities for Giant athletes long into the future. We know we’ll never forget!

Here’s a look back at the 2015 Giant Challenge events:

Meshingomesia Golf and Social Club owner Scott Moorehead generously helped his alma mater Marion Community Schools, and with Meshingomesia golf pro Doug Hill, pro golfers and MHS alumni Jackie Gallagher Smith and Jeff Gallagher, and the Marion High School Alumni Association, the Giant Golf Scramble was one of the largest scrambles in the club’s history! A few minutes of rain sent golfers under the umbrellas briefly in the morning, but the day was great! 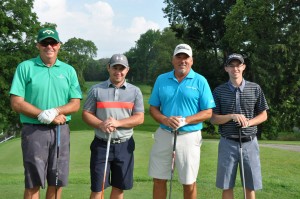 But the ultimate winners are all of the Marion Giants who will benefit long into the future from the new Giant Dreams Athletic Endowment at the Grant County Community Foundation! $5,125.00 was raised at the scramble for the endowment!

Doug Porter, Deb Wuertley, and Matt Dubuque assembled an all-star lineup of Giant legends to play tennis for the first annual Giant Challenge Battle Royal! There were more than 50 participants, but due to darkness and weather, the match was ruled a draw! But EVERYONE wins for the cause.

Julie Cline assembled an all-star legends team of alumni soccer players who were largely responsible for building the soccer program at Marion High School. It was a hard-fought match, but the alumni were able to squeek by the highly athletic varsity team. Alumni up 1 – 0 for the 2015 Giant Challenge.

Coaches, parents, kids, and soccer fans have made this one of the most popular sports here in Marion, and we have a great feeder system with the PAL Club and Marion Lightning teams. The future is bright for Marion Giants soccer, and the Giant Dreams Endowment will only help strengthen it!

Team captains Aaron Vermilion and Alan Beck assembled the Alumni Legends football team, along with Nathan Cook, Biggens Anderson and Andrew Morrell! This alumni team was stacked! Built! They were strong and took an early lead. But the varsity team, coached by Aaron’s brother Ryan “Tank” Vermilion, were relentless, fast and made unbelievable catches to defeat the alumni team. The varsity Giants tied it up at 1-1 for the 2015 Giant Challenge.

The Marion Giants football program has produced two NFL players, many college players and has a rich history of success. But the cost of helmets, equipment, jerseys, etc., is a GIANT reason we need support in the NEW ATHLETIC ENDOWMENT at the Grant County Community Foundation. We hope you’ll consider giving to the Giant Dreams Athletic Endowment and help us continue to provide opportunity to young Giants for decades to come.

When Coach Terry Lakes decided to retire after 32 years leading the MHS track and field team, an army of people came out to honor him and run/walk for a great cause. The winners of the 5 K were: 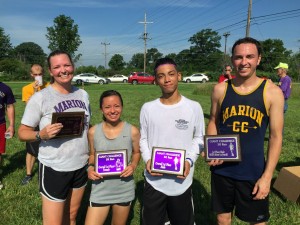 The MVP of the event was definitely MHS Class of 1954’s Joe Voght, running strong even in the 98 degree heat! What an impressive model for today’s Giants!

The Giant Volleyball Alumni All-Stars had so much fun on the court, and their enthusiasm was contagious! The MHS varsity team is very young and was led by their newly named coach, Dale Gearheart, but they hung with the legends and made 2 out of the 3 games very close. Congrats to all participants! (Alumni up 2-1 on the weekend.)

The Giants baseball team has won a state championship

Alumni team captains Amanda Keller and Dustin Keller assembled the Giant Alumni All-Star Team and did a fantastic job! In sweltering heat, the teams agreed before the game to only go five innings. But after the fifth, the score was tied, and the teams decided to go seven innings! The alumni were up by two runs in the bottom of the seventh, but they put on their rally caps and came back and tied it. Due to the weather and the overlap of women’s basketball coming up next, the game was called to a draw, keeping the overall score for the weekend at 2-1 in favor of the alumni!

Erin McGauhey, Bre Laypoole, Laura Friday, and John Earnest helped build this Alumni Legends Team filled college players! It was a very tight and physical game with many lead changes. Lots of laughs, too, with the antics of ref Ronnie Drake calling fouls on his daughters. Varsity coach Jerry Freshwater gave up coaching to ref, too. This game was so competitve that nobody wanted to come out of the game, which made it fun to watch. Even Cathy Moritz and Jill Jill Bradford-Williams were called out from the crowd as former players in street clothes to sink free throws. The alumni barely won putting them up 3-1 in overall Giant Challenge competition.

Laura Friday went on to earn the “Voice of the Marion Giants” Jim Brunner’s vote for Giant Challenge female MVP, for a weekend performance that included 2 goals in girls soccer, key plays for girls basketball, the runner-up title in the 3-point skill competition, and a few key plays in the boys basketball game as well!

Amanda Keller, Dustin Keller, and Jack Marshall helped build and coach the boys Alumni Legends Soccer Team, and what a team it was! They were stacked with GREAT players! With that said the outstanding coach of the boys soccer program Jorge Berry kept his young players loose and highly competitive against his former players. With only a 1-0 lead at halftime, the Alumni were figuratively and literally sweating in the near-100 degree heat. But in the second half the alumni opened it up, and in the end they came out victorious against the MHS varsity team, making for a great game and a GREAT program at Marion High School! Congrats to all of the participants!

The Main Event did not disappoint! Jim Sutter Sr. assembled a Hall of Fame Alumni Legends team, including legends including Jay Edwards, Scott Wood, and Julius Mays, just to to name a few. Leading the way was legendary coach Jack Colescott. This game had everything in it! Superstars from the ’60s, ’70s, ’80s, and on! With seven state championships and the tradition of one of the most elite basketball programs in the country, the place erupted with excitement when the Giants of yesterday and today took the court together.

The young varsity team was fast and could shoot. Tim Leavell scored 38 against the legends and was inspired by Scott Woods’ outside bombs. Jack Colescott and Jim Sutter Sr. had to throw everything at the varsity team to keep it close. At the 10-minute mark in the second quarter Jack Colescott pulled out five female alumni superstars who surprised everybody and scored on the varsity boys team!

During the halftime skill competition Scott Wood battled his sister, Jay Edwards went up against Laura Friday, and Todd Chin went up against Erin (Guarneri) McGauhey. Chin came out the champ.

As the second half progressed, the game continued to be close, with the varsity team in the lead. At the 3:30 mark in the fourth quarter Jay Edwards took the famous Bill Green yellow sweater (which had been sitting on an empty chair in honor of the late great coach) over to the varsity team’s bench to try to persuade Coach James Blackmon Sr. — the all-time leading scorer of Marion Giants basketball — to suit up and go against his varsity team. James Blackmon Sr. did not dissapoint and stripped down to his jersey and shorts and played with his fellow alumni to help lead them to victory! But at the end of the game it became clear that EVERYBODY who particpated in the Giant Challenge was a winner! It’s where the PAST helps the PRESENT build the FUTURE!

We hope the Giant Challenge helps inspire alumni near and far to help build the Giant Dreams Athletic Fund (and the funds for Arts and Academics as well) to help provide opportunities for young Giants for decades to come.

>> Click here to view information about the MHS Hall of Distinction, which honors our outstanding alumni!